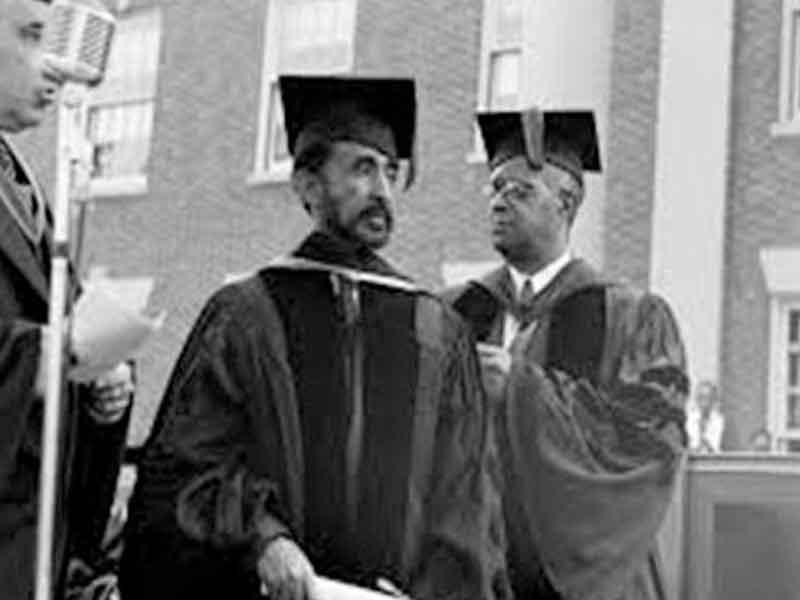 Haile Selassie, Emperor of Ethiopia, received a thunderous ovation from Negroes in America. The demonstrations were especially significant in Chicago, New York, and Washington – a fact which serves to highlight the meaning of race in today’s world.

On the south side, adults and children waved the red, green, and gold flags of Ethiopia, and screamed their best wishes to him. Some even had a few signs in Amharic, the emperor’s native tongue.

In Washington, where a third of the population is Negro, shouting thousands greeted him at the airport and he received an honorary degree from Howard University, a Negro institution.

Men and women in Harlem stood packed to at the curbs as the emperor toured the Negro neighborhood. Many leaned out of the windows and cheered the motorized procession of the “Conquering Lion of Judah”.

Everywhere, hours before he arrived, preparations had been under way for his reception. Placards with his portrait had been placed on loft buildings and tenements, and wooden horses were set up along the curbs. Thousands were in the sun early, many under parasols, as police reinforcements took up their stations along the procession route.

There was a nice diplomatic touch in Harlem. The emperor was taken to the Abyssinian Baptist church, whose minister is the Rev. Adam Clayton Powell, a member of the House of Representatives. The church was founded in 1808 by Ethiopian settlers who resented being segregated in the white churches of the city.

His tours of Negro communities were the most hectic phase of the emperor s crowded schedule and he recognized racial loyalties. During the Howard university ceremonies, he made this observation about the Supreme Court decision outlawing segregated education:

“Events in recent days here in the United States have brilliantly confirmed before the world the contributions you have made to the principle that all men are brothers and equal in the sight of God.”

His granddaughter was no less inquisitive about racial developments when she was in Chicago. John H. Sengstacke, editor and publisher of the Chicago Defender, sat alongside the Princess

Sebla Desta at the luncheon, given at the Sherman hotel by the association of commerce in honor of the monarch.

The concern of Negroes in America about Ethiopia developed in the winter of 1935 with fascist Italy’s assault upon that country. But rumors that the Ethiopians were not racially Negroes threatened the unity of Negroes in this country with those in Selassie’s nation.

When Dr. Maluku Bayen, a native Ethiopian, arrived in this country in 1936 as the emperor s official representative, he attempted to counteract such propaganda with the explanation that the Ethiopians reject the term Negro because of its connotation of slavery.

Dr. Bayen himself was a distinctly Negroid type. And he assured Negroes that Ethiopian rejection of the term Negro did not prevent Ethiopia from aligning themselves with American Negroes in blood brotherhood because of common ancestry.

This statement was wholly reassuring to Negroes in this country, and was supported by Negro scholars. They reported, after a trip abroad:

“The emperor is very conscious of the fact that he is today the only black sovereign in the world, and he considers himself as the natural leader of the Negro race. He is fond of repeating the phrase that ‘Ethiopia is the trustee for the future of the black races.”‘

The fact is, Ethiopians think of themselves as a nonwhite nation, not as a race. But Negroes in the United States feel a distinct pride in the existence of a black nation with a black monarch, and thus share the luxury of racial identification.