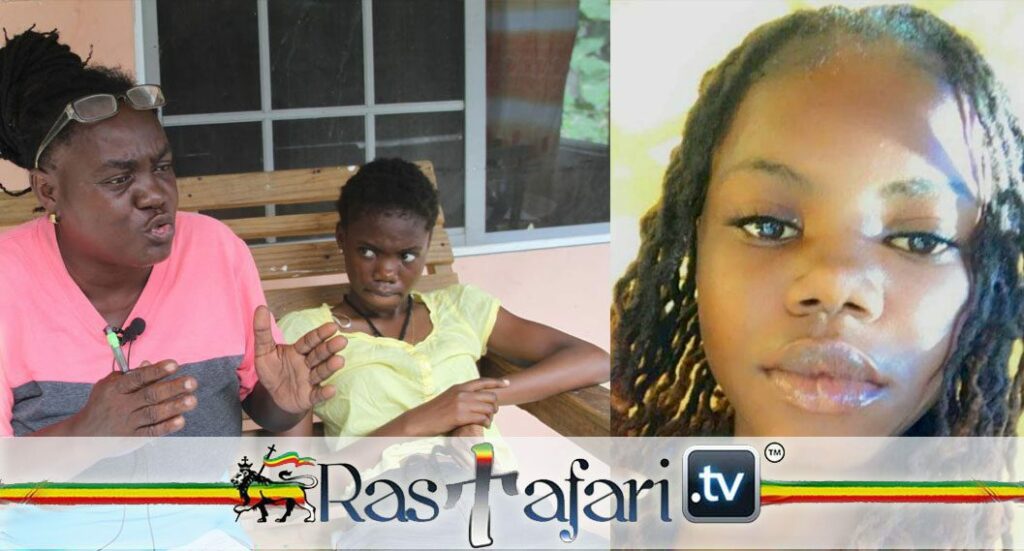 She was charged JA$6000 or 10 days in prison. Her bail was not paid immediately so Nzinga had to stay over in custody. While in custody at the Fourth Path Police station in Clarendon, Jamaica, according to Nzinga, a policewoman named Constable Mitchelle, cut her hair off. Several days after, when Nzinga’s mother arrived to pay the fine, she said she did not recognize her daughter. She was shocked to see that all her daughters locs that she had been growing since Nzinga was a young child are all gone. This incident has ignited a worldwide outcry from the 4 corners of the earth, especially in the Great Rastafari Nation.

Unexpected Twist, Nziga’s peers said she trimmed her loss and regret doing so.

In an unexpected twist, according to recent reports, a nursing store at The Meadowlands Center for Excellence in Clarendon, where King attends, says King gave a completely different version of events at students at her school.  Nzinga’s peers allege that Nzinga said several times that she regrets cutting her locs on July 26, 2021,  because she had developed mold in her hair.   RasTafari TV Network and our audience would like to know the truth or if the public causing mischief.

How does a person go into custody with locs and leave without locs? Show us her mugshot, her police photo. Also, what is Corporal Mitchell’s story?

The trimming and gross traumatizing Rastafari & Indigenous peoples have been a common practice on the island of Jamaica, in the Caribbean, and throughout the Diaspora for centuries. Rastafari TV Network stands in solidarity with all families who seek justice in the name of Indigenous and Rastafari Rights And Liberty.

We are seeking not just another apology. We command immediate legislative changes in the Jamaican Parliament to be passed to enforce and protect any and every Indigenous and the Rastafari person with locs or natural hairstyles. We demand compensation for every individual or family whose rights have been violated or unjustly attacked for practicing their indigenous roots and culture.

We demand the immediate dismissal of all police officers involved in these and other atrocious and presumptuous acts present, past, and future. We show no respect to a person in seeking truth and enforcing your laws. Jamaica’s so-called leaders have hunted, brutalized, and shown no or little respect for the Great Rastafari Nation event before the horrific Coral Gardens incident decades ago. Rastafari heritage as a nation and a people has made an invaluable contribution to Jamaica’s music, culture, and economy but reap very little benefit. Our Indigenous and Rastafari rights have been violated and the Rastafari people of the world stand in Solidarity to enforce the laws and treaties that were signed and made LAW to protect our rights. We will no longer sit idly by and allow this or any other incident against our indigenous rights to be violated.

The Time Is Now! We Stand United against Violation of Rastafari Rights! Rastafari Is One! Enough Is Enough!

Sis. Fan'aye SunLight-Selassie is the founder of RasTafari TV Network and owner of http://SiteMedia.us, a multimedia design boutique based in South Florida, USA. SiteMedia services many renowned clients throughout the world assisting in brand development, graphic, web design and media services for government to schools. After many years experiencing substandard media and inaccurate publishing of the Life and Faith of H.I.M. Emperor Haile Selassie I, Fan'aye trained her 5 children in the art of design, along with 2 other colleagues, sacrificed years of countless man-hours to build and donate the RasTafari TV Network Archives for all children of the Most High and for those who love H.I.M. in order to share the Rich and Divine Heritage of Ethiopia with the world. You can email site@sitemedia.us to contact her personally or call toll free at 1.888.308.6616. Website: http://sitemedia.us