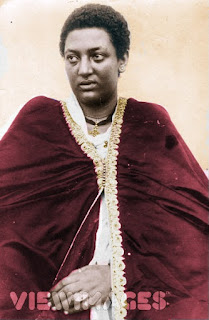 Woyzero Menen Asfaw was born April 3rd 1891 in Egua at the mountain fortress Ambassel, located in the Wollo district of Ethiopia. She was born to noble parents, Jantirar Asfaw Ali and Woyzero Sehin Mikael who was the daughter of the famed King Mikael of Wollo, father of Lidj Iyasu. She had a brother Haile Maryam Asfaw. Much of Her family carried an Islamic background which was then converted to Orthodox Tewahedo Christianity.  It is said that their family line can be traced back to the Prophet Mohammed.  As a young girl Menen, whose name denotes Her beauty and high esteem, was educated at home by tutors. She was taught to read Amharic letters, cotton spinning, household management and childcare.

Throughout Her life Menen was devoted to Her faith. She loved going to church with Her mother and women of Her community. Like many young Tewahedo girls of Her time Menen had crosses tattooed on Her hands.

From an early age, 9 years old, in the year 1900, Menen was married by civil contract (an arranged marriage organized by family for the purpose of economic/political/social alliances), becoming Woyzero (Mrs.) Menen. She had her first child at age eleven. In Her first marriage to Dejazmatch Ali of Cherecha She had two children a boy Jantirar Asfaw Ali and a girl Balaynesh Ali. This marriage ended in divorce and She wed again to Dejazmatch Amede Ali Aba-Deyas; having another boy and girl, Jantirar Gebre Egziabeher Amede and Desta Amede. Both these husbands were prominent Wollo nobles. Her second husband died suddenly and Her grandfather Negus Mikael arranged for Her to marry a Shoan noble Ras LeulSeged Atnafseged. This marriage was annulled so that She could marriage Dejazmatch Tafari Makonnen when She was 20 years old, which was Her first marriage officiated in the Orthodox Church.

Her four children were left in the care of their fathers’ families, as in Ethiopian custom, only children under the age of 5 were allowed to stay with their mothers after a divorce.

Source: The Biography of Empress Menen Asfaw The Mother of the Ethiopian Nation by Anjahli Parnell