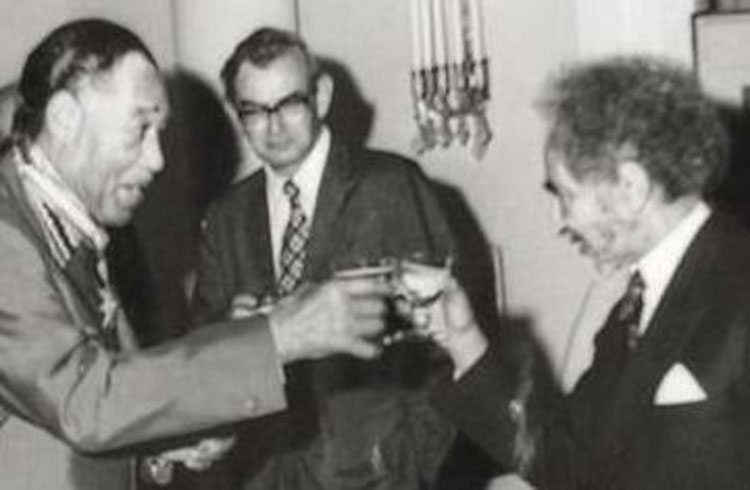 In late 1973 Ellington and his orchestra made Duke’s last European concert tour, but the State Department arranged for them to go to Africa as well.

These U.S. State Department cables about the African leg of the tour are from Wikileaks, which I am uncomfortable visiting.

A Chronicle of Duke Ellington’s
Working Life and Travels

U.S.A. Department of State Cables
re Ellington in East Africa, 1973 3. DEPT PAYING INTERNATIONAL TRAVEL AND PERFORMANCE FEES. POST OR SPONSOR WOULD PAY ROOM AND BOARD (20-21 PEOPLE) PLUS ALL STAGING, WITHIN COUNTRY TRAVEL AND RELATED LOCAL COSTS. ELLINGTON WILL NEED ONE SUITE FOR SELF; OTHERS WILL WANT SINGLES. IN EVENT ADMISSION

CHARGED, ANY NET CONCERT PROCEEDS LEFT ( AFTER APPROVED STAGING COSTS, WITHIN COUNTRY TRAVEL, ROOM AND BOARD ARE DEDUCTED) WOULD BE SPLIT 50/50 BETWEEN USG AND LOCAL COSPONSOR. IF EMB SOLE SPONSOR, 100 PERCENT OF NET RPT NET PROCEEDS MUST BE RETURNED U. S. TREASURY. ABOVE CUSTOMARY WHERE CU/ CP FUNDING PERFORMANCE FEES. IF LOCAL COSPONSOR UTILIZED, ADVISE NAME.

4. CONCERTS MAY BE INSIDE OR OUTDOORS. WHERE TWO ARE LISTED IN SAME DAY, THEY MAY BE SCHEDULED EITHER AFTERNOON AND EVENING, OR ONE EARLY EVENING, ONE LATE EVENING. ANY CHANGE IN ABOVE CONCERT SCHEDULE MUST BE APPROVED IN ADVANCE BY DEPT SINCE TOTAL CONCERTS IN EAST AFRICA CANNOT EXCEED NINE.

5. ALL PROPOSED OFFSTAGE ACTIVITIES MUST BE APPROVED IN ADVANCE. LIVE TELECASTS AND RADIO BROADCASTS OF ELLINGTON CONCERTS ARE NOT RPT NOT PERMITTED UNLESS LOCAL SPONSOR WILLING PAY ADDITIONAL HIGH FEE UNDER ELLINGTON CONTRACT WITH UNION. THEREFORE DEPT DISCOURAGES POSTS’ INVESTIGATING RADIO AND TV BROADCASTS OF CONCERTS.

6. ELLINGTON EUROPEAN VISIT IS PART OF TOUR BY SEVERAL MAJOR JAZZ ENSEMBLES FROM NEWPORT JAZZ FESTIVAL, ANOTHER UNIT OF WHICH ( B. B. KING) WILL TOUR WEST AFRICA FOR ONE WEEK SIMULTANEOUS TO ELLINGTON’ S EAST AFRICAN VISIT.

7. NO MEDIA ANNOUNCEMENT OF ABOVE SHOULD BE MADE IN FIELD AT THIS TIME. DEPT PLANNING ANNOUNCEMENT AT LATER DATE.

8. SINCE KENYATTA, HAILE SELASSIE AND ELLINGTON ARE OF NEAR SAME GENERATION, POSTS MAY WISH CONSIDER PERSONAL PERFORMANCES OF ORCHESTRA FOR TWO LEADERS AS PART OF TOTAL CONCERT SCHEDULE ALLOWED IN EACH COUNTRY.

The Keys to Diplomacy

Duke Ellington, the renowned composer, pianist, and internationally famed band leader, toured for the State Department more than any other musician. This began with his orchestra’s three-month swing through the Middle East and South Asia in 1963 and ended with performances in Eastern Europe, Ethiopia, and Zambia in 1973.

The first trip included Syria, Jordan, Afghanistan, India, Ceylon, Pakistan, Iran, Iraq, Lebanon, and Turkey. The Washington, DC native won over the public and diplomats alike with his warmth and charisma both on and off stage. Despite a grueling schedule of travel and performances, interrupted by periodic illnesses, Ellington delighted State Department officials who described him as “without fail gracious, articulate, charming, and absolutely winning,” and judged the band as “excellent ambassadors and representatives of America.” The Duke’s encounters with local musicians and unfamiliar musical forms influenced his composition and can be heard in his album Far East Suite.This tour was tragically cut short by the assassination of President Kennedy on November 22, 1963. In Turkey, Ellington sat up all night composing memorial music for the slain President, feeling strongly that continuing to perform was a better way to honor Kennedy than canceling concerts. The band was ultimately recalled to the U.S., but this trip proved to be just the beginning of Ellington’s far-reaching travels as a Jazz Ambassador.

There were State Department appearances in 1966 at the First World Festival of Negro Arts in Dakar, Senegal, and tours of Latin America and Asia in the early 1970s, but Ellington’s greatest diplomatic triumph came in 1971 when his orchestra toured the Soviet Union. This trip followed the announcement of President Richard Nixon’s impending visit to the USSR and promotional materials for Ellington playfully presented him as the front man for the President! The Ellington Orchestra played to ecstatic crowds in five cities. In Moscow, tickets were scalped for the then extraordinary sum of fifty dollars each as travelers descended on the city from distant points in the Soviet Union. With musicians and State Department personnel meeting surreptitiously at jazz clubs far into the night and even diving out of windows as the police arrived, jazz critic Leonard Feather called the tour “the greatest coup in the history of musical diplomacy.”

Subsequent to this trip and during the last three years of his life, Ellington’s activities for the State Department actually accelerated. The seventy-two-year-old Duke immediately followed the Soviet experience with performances in Eastern Europe and a tour of Latin America in late 1971. He visited Asia in 1972, including concerts in Vientiane, Laos, while the Vietnam War unfolded around them. In late 1973, he made his final State Department appearances in Zambia and Ethiopia, where he gave a command performance before Emperor Haile Selassie who presented him with a medal. Ellington became fast friends with the Ethiopian jazz fusionist Mulatu Astatqé as the two musicians brought their bands together to improvise with traditional Ethiopian and Western instruments. Already suffering from advanced lung cancer, but traveling nonetheless, Duke passed away the following spring.