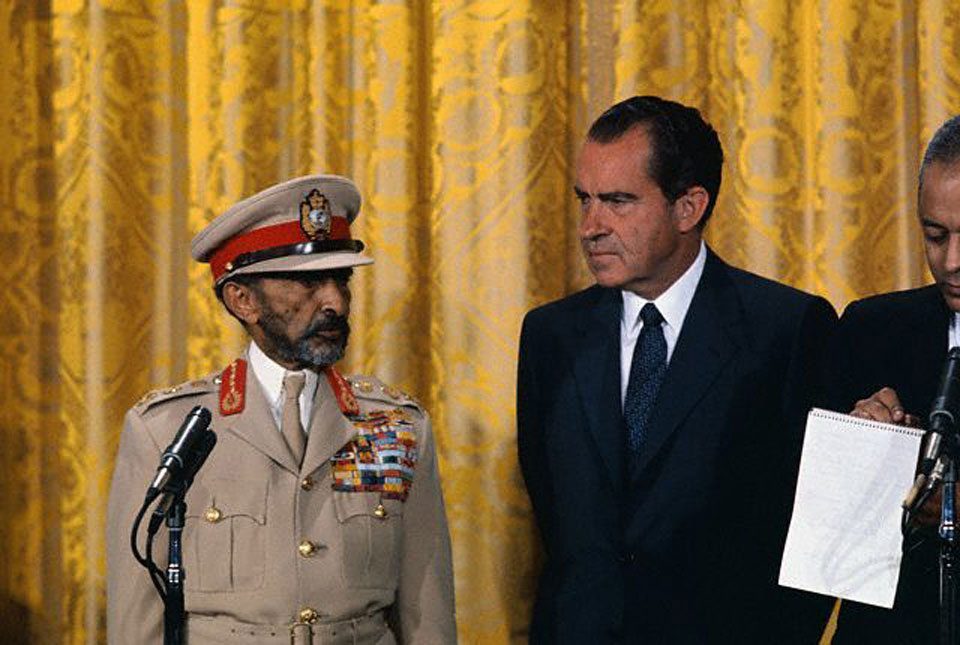 Richard Nixon: ”Toasts of the President and Emperor Haile Selassie I of Ethiopia.,” July 8, 1969.

Your Imperial Majesty and our guests this evening:

As we welcome His Majesty again to this house, our thoughts must go back to the many events that have occurred in this room, because no one can be in the presence of His Majesty without thinking of all the history which he has seen and which he has made.

So tonight we honor him as the leader of a great country with whom the United States is very fortunate to have the most cordial and close relations.

We honor him as the leader and counselor and adviser to the great new nations of Africa in which he has played such a significant role, and we honor him also for his world leadership with which all of us are familiar.

I have been trying to think of something that would be appropriate to say that has not already been said about His Majesty on what is now the fourth occasion that he has been in this room as the official guest of a President of the United States.

As I pointed out when we welcomed him in the White House this morning, this is a record that has never been equaled before and may never be equaled again, the head of state being received by four different Presidents as an official guest.

But he is more than that, and will be remembered by all of us, not only in this country but throughout the world, for more than those things, because that could be said about many of the official guests who are honored in this room.

So it is with His Majesty. He has wisdom. He has had a long life, and, I know from personal experience, an understanding heart.

I share that with you for one moment. I had the great privilege, which some in this room have enjoyed, of visiting his country in 1957. My wife and I were received as royal guests at that time and treated royally. I returned again to his country in 1967, holding no office, having no portfolio whatever. I was received again as a royal guest and treated royally. This is a man with an understanding heart.

So tonight we honor him for what he has been to his country, to his continent, and to the world. We honor him also for what he means to history. What he means to history is something more than that of national leader or continental leader or world leader. What he means is a spirit-a spirit that in these days we sometimes think is lost, the spirit that does not give up when all the odds seem too difficult to overcome, the spirit that will not compromise when there is no compromise which would not destroy that in which he believed, the spirit that inspired us all in 1936, when we saw him standing tall and proud before the League of Nations talking for what all of the pragmatists, all of the realists said was a lost cause.

But because he spoke so strongly and proudly and vigorously for what was said to be a lost cause he was victorious, his nation was victorious. But what was more important, the cause of freedom, of strong men who refuse to be overcome by the odds and by the difficulties–that survived.

What His Majesty leaves, that heritage, on the pages of the history books of the world means more than the leadership of a nation, or a continent, or, for that matter, of the world. And for that moment of inspirational leadership we are all in his debt.

And tonight therefore, I know that all of you will welcome the opportunity to join with me, as has been the occasion on four different times, as I have indicated before, in this room, to drink to his health; and in drinking to his health, I have found that there is a phrase in his country, a phrase of salutation, which I think is particularly appropriate. Translated from the Amharic it reads as follows: “May he live long for our glory.”

I think there is nothing more appropriate that we can say to His Imperial Majesty tonight than that we trust he may live long for our glory.

Let us raise our glasses to His Imperial Majesty, Haile Selassie.

His Imperial Majesty Haile Selassie I spoke in Amharic and his remarks were translated from notes by Ambassador Minasse Haile of Ethiopia as follows:

I wish to express our heartfelt gratitude to Your Excellencies, to you, the Government, and the people of the United States of America, for the very warm welcome and cordial hospitality accorded to me ever since my arrival to this great and friendly country.

The kind and generous words which you have just addressed to me and my people are deeply appreciated. As you have tightly said, the friendship existing between us is of long standing and goes far back to when you were the Vice President of the United States of America.

The discussions and the exchange of views which I have had with you during your two visits to our country have certainly helped in strengthening this friendship.

This is not the first time, as I said today, for us to visit this great land. Upon the invitations that have been previously extended to us by your predecessors to visit this country, we have come here and learned at firsthand how much the American people treasure the friendship of our people.

This friendship has been tested in times of war and peace, and it has proven to be a firm and lasting one.

Thirty-three years have lapsed since our innocent and defenseless people suffered the agonies and atrocities of Fascist aggressors whose action irked and aroused the conscience of men and women everywhere.

It was following this most brutal aggression, as you have already mentioned this evening and this morning, that we made our appeal to the League of Nations to condemn this inexcusable aggression and to support Ethiopia’s just cause.

Though the League of Nations failed us, we continued to seek its support, because we were convinced that only through this world body could this aggression be checked in time before the whole world was engulfed in a great catastrophe.

Our warnings were not heeded. However, we were proven right in the ensuing years. The moral force of our cause and the refusal of friendly countries like the United States of America to recognize the annexation of Ethiopia by force helped to sustain us and our gallant people in the struggle for total liberation of Ethiopia.

I, myself, and our people, are most grateful for this contribution of the United States. Ever since Ethiopia liberated herself from enemy occupation, the Government and the people of the United States of America have generously contributed to our effort of reconstruction and development.

Ethiopia, like other developing countries, has numerous problems in the field of education, public health, agriculture, communication, and other things related to development.

With regard to education, the people of the United States of America have given invaluable assistance by building schools in Ethiopia and by providing teachers. They have further granted scholarships to Ethiopian students to pursue their higher education in the United States of America, and have also given assistance to the Haile Selassie University, the first university.

One of the principles of American assistance to Ethiopia has also been in the field of communications. The friendly Government of the United States of America continues to participate in Ethiopia’s efforts to modernize its agriculture and improve the health of its people.

We wish to express our appreciation and heartfelt thanks for the continued assistance given to us by the American people in our endeavor to maintain the security and territorial integrity of our nation.

In the field of international relations, the United States and Ethiopia have similar interests and objectives which give more reason for our two countries and peoples to increase that area of cooperation.

The age-old friendship existing between Ethiopia and the United States of America, we believe, has flourished as a result of our close cooperation both in the interest of our two peoples and in the general cause of world peace. It is our belief that our two countries should continue to cooperate even more closely.

Ethiopia is a nation fully committed to African unity and to the greater cause of world peace and subsequently shall continue to support and strengthen the Organization of African Unity which was established as an African instrument for peace and progress.

The Organization of African Unity, consulting its Committee on Nigeria, of which I have the honor of being chairman, has so far done its utmost to find ways and means of ending the tragic war in Nigeria. Without despair, we shall continue to exert our efforts with a view to finding an acceptable formula for peace.

It was very gratifying for me when I read the fact that you, Mr. President, have selected a competent individual to represent you in the humanitarian effort of the United States in Nigeria. I have had the privilege of talking with your representative and I am glad to report that our ideas about relief operations are very close and coincide on many points.

The history of the Ethiopian people is a history of a peace-loving nation. The annals of history are proof of the general stand of Ethiopia in this regard. However, there are still certain quarters who seek to compromise the territorial integrity and unity of our country. Such a sinister attitude will only strengthen our determination to safeguard the freedom and independence of our nation.

The reality of our position has impressed upon us the need to remain strong in all aspects of defense, a measure which can only be realized through the accelerated development of our nation. We are confident that the friendly peoples and Government of the United States of America will continue to give Ethiopia their usual encouragement and support in our determination to advance the good and well-being of our people in a climate of peace and stability.

NOTE:  DO YOUR OWN RESEARCH.  THIS INFORMATION IS SHARED TO EMPOWER BUT YOU ARE URGED TO READ, RESEARCH & MAKE THE WISE DECISI...
Theme developed by TouchSize - Premium WordPress Themes and Websites